Cover Reveal: Take It All

Welcome to the cover reveal of Take It All!! This book is a New Adult romance set to be published August 4th, 2013.

Take It All by Emma Grayson 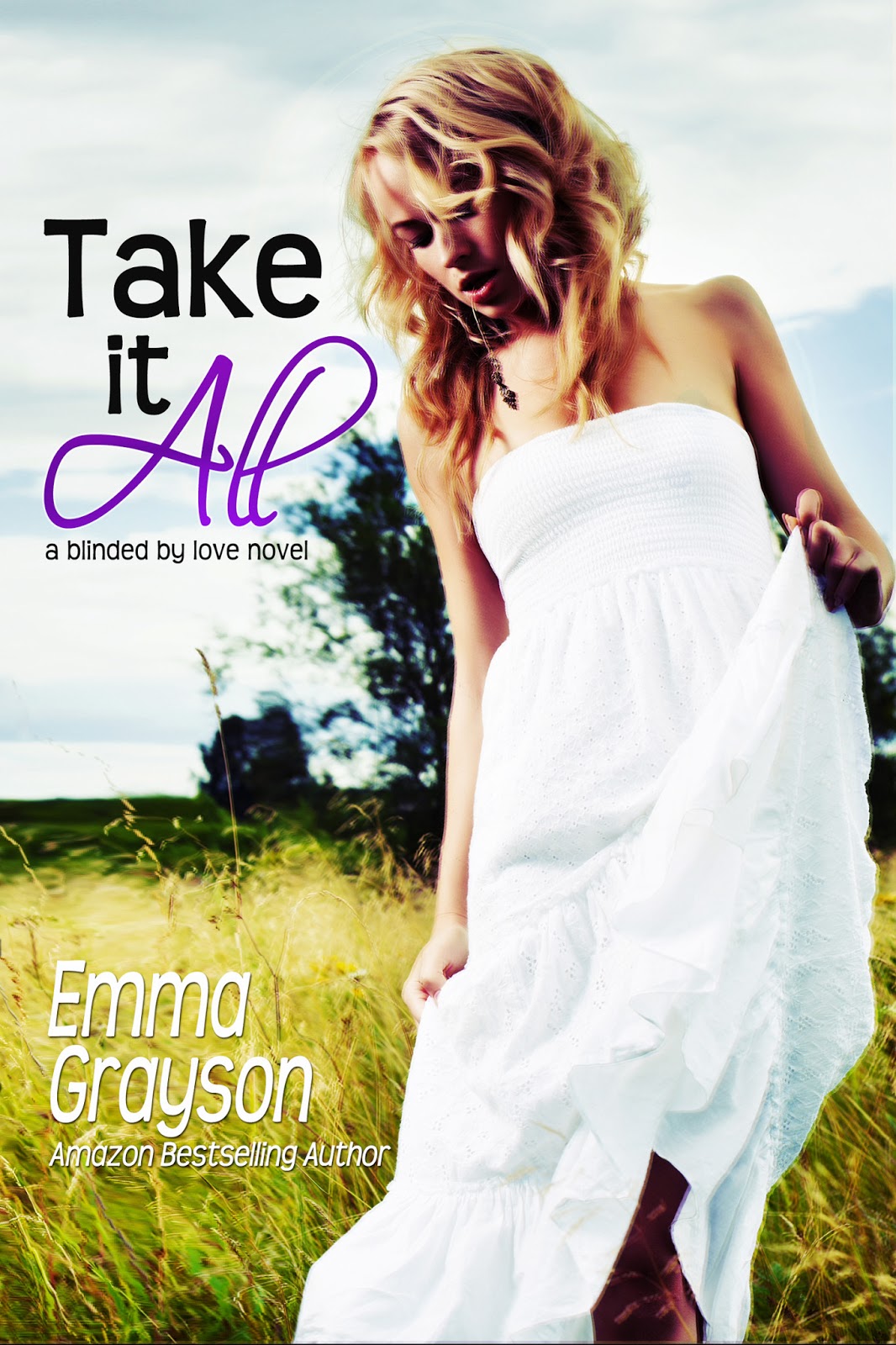 Judy Garland said it best, ‘For it was not into my ear you whispered but into my heart. It was not my lips you kissed but my soul.’

If you asked her why she loved him, she would only be able to tell you it was because he was who he was and well, she was who she was.

All her life Lennox Ward felt incomplete. That her heart was always searching for that one special thing; that special someone she had yet to find.

Then Caleb Kingston came strolling back into her life unexpectedly, and little did she know her world was about to come crashing down around her; forever shattering it.

Is love enough to conquer all?

Will she be able to lead them out of hell and off their path of self destruction?

Or will Caleb take it all?

This is the first book of the Blinded by Love series.
Age: 16 years and up

He bent over and softly placed his lips on the tip of her nose, just as he had done for as long as she could remember. “I’ll be back,” he whispered quietly, hesitating before finally pulling away.

Their eyes met, and she knew, she could see the familiar distance in them just as she saw only a couple months before. But this time was going to be different. Unlike the last time, she wouldn’t know where to go or what to do. She wouldn’t be able to search for him and take him by the hand, and guide him away.

His eyes slowly moved from hers as he turned and walked towards the door, only to stop a moment, lingering in the doorway like he was second guessing his decision. She slowly sat up, hoping his mind had changed, but her hope quickly vanished as he continued out the door and into the hall.

He didn’t have to say it; she could sense it, just like she’d done before. Only this time, the gut twisting feeling she got when he spoke, told her what he couldn’t say, and the unspoken words in his eyes. His azure colored eyes that still had a way of making her knees weak and heart slam against her chest, all the while small sparks of electricity soared through her body, all with a single simple look.

Lennox sat there in her room. Dazed, as the numbness slowly crept up and through her body, into her heart and soul, as the voice in her head spoke in loud volumes, telling her over and over, the things she didn’t want to believe. Her eyes, still fixated on his back, watching as he became further and further away; almost out of sight.

She swallowed, trying to rid the dryness that made it hard to breathe. Her mouth finally unfroze and her lips parted. “Caleb,” she spoke quietly, meaning for it to sound louder, so he could hear the gut wrenching pain that filled her normally soft voice, and he’d come back to her. But all that sounded was a whisper ending with a small sob.

He was her all, he’d always be her all, and she knew it the day he unexpectedly walked back into her life. That moment, when their eyes met, she knew they were made for one another, that they were meant to be. They were each other’s missing piece and he found her, in all his gorgeous gratifying glory, grabbing her by the hand, and her entire heart and soul.

Together Lennox and Caleb went places. Places she never, in her life, thought she’d ever go. The things she saw and witnessed are of things no one should have to see or speak of again, because once was enough. His path took them on a journey through hell, right to the burning pit, where, when given the chance to leave, she stayed and fought for him, and a way back.

She did things along the way that she’s not proud of. Things she’ll never be able to forgive herself for, unthinkable things that changed her demeanour and relationships with the people in her life. Lennox, being the typical girl next door, would never, in a million years, do what she did but when it came to Caleb, she’d do anything.

Through it all Lennox lost a lot along the way, important things. But at the time nothing was more important than Caleb and her being together. They learned once that not being together was more toxic then actually being together. So, in her mind, there wasn’t a doubt, or voice, telling her she made the wrong choice five months earlier, when he walked through the doors of Fizzy Wigs; a local cafe in Spruce Hill.

The scary part was, after knowing everything and going through all they went through, Lennox, given the chance to do so, would go back and do it all over; not changing a damn thing.

She continued to watch him walk away, rounding the corner, and disappearing from her sight without a glance back. The breath she didn’t know she’d been holding rushed out, as if someone came up to her, and punched her in the stomach. It was then she realized it hadn’t been enough, none of it was.

And even more heartbreakingly so, neither was she.

At that moment realization hit, and she was on her way back to hell, only this time she was going alone, and the battle out was a far bigger challenge then the last.

With her eyes still on the last place she saw him, silently wishing him to come back, a man in a white coat obstructed her view. Blinking, she looked up at him, his face unreadable as he looked down at the clipboard in his somewhat feminine hands. When he finished flipping through the white sheets of paper, his eyes lifted and met hers.

He witnessed, through her eyes, her world crumble and shatter around her, leaving nothing but an empty, hollow shell in its place.

“Ms Ward....” he said carefully, making note of how delicate and fragile she looked.

Lennox sat there looking at nothing but dead air and the small dust particles as they fluttered around, the room was silent, and she didn’t even hear when the man spoke. It was as if someone had muted real life.

Her mind was on only one thing.

When he left her there in her room, he knew he wasn’t leaving alone, that he was taking her with him, maybe not physically, but in every other way possible. It was more than a piece of her he took, it was more than a part of her, it was every piece.

And she let him.

“Ms Ward, did you hear what I just said?” the man’s comforting voice echoed through the room.

Lennox shook her head, pushing the thoughts aside, as she looked up at him, and watched his lips move as he repeated the words that not only sent icy waves through her already numb body, but caused what little was left of her world to shatter.

And that’s when it happened, that’s when she began to drown. Drowning in memories, like a surfer in a wild tidal wave, as the gates opened and everything from the past five months came flooding back. 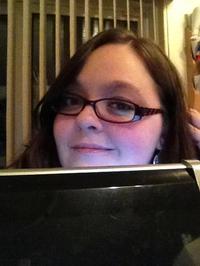 Emma Grayson is a Canadian author who resides outside of Edmonton, Alberta with her family and five year old son.

She is currently working on Take it All, book one in her new series, Blinded by Love, as well as Unbearable Guilt, book two in her Breathe Again series.

When she’s not writing she enjoys time with her son, going to movies, reading, or enjoying Starbucks latte’s with her girlfriends. She’s the lover of music, television, all things purple, Oilers hockey and doesn’t leave the house without her iPhone, Kobo, flip flops or a pack of gum.
Blog * Goodreads * Facebook * Twitter 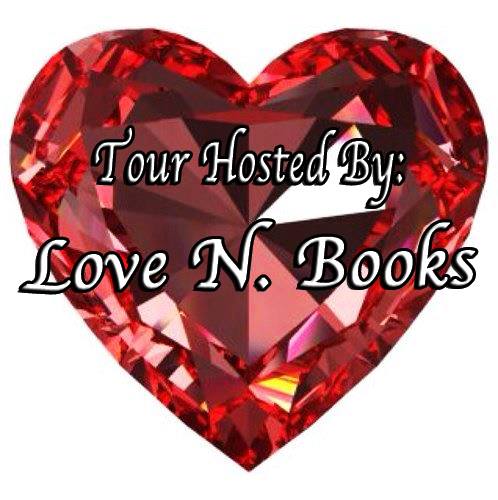 This cover reveal was organized by Love N. Books.