Early Review on Summer In Napa

WARNING: This post and the links from it contain adult content. If you are under 18 years of age or if such content offends you, please EXIT now.
So I came upon this book because I won the first one, Under The Mistletoe, over on Kimba's blog. It left me wondering what was next, so when I saw that NetGalley had the next one, I immediately requested it. And wouldn't you know it, they approved me. So I got this book and it took me a while, but it's here.


Summer In Napa by Marina Adair 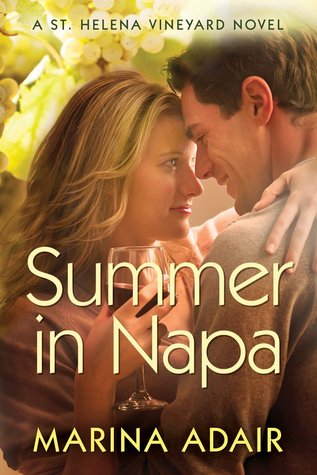 When Alexis “Lexi” Moreau caught her husband, Jeff, sampling the sous-chef’s more intimate wares in their New York restaurant, she ran—all the way back to her hometown of St. Helena, California. Six months later, Lexi has no husband and no restaurant. But she does have a three-step plan: First, convert her grandmother’s bakery into her dream bistro. Second, ignore Grandma’s matchmaking attempts. And third, avoid Marco DeLuca, her ex’s commitment-phobic, distractingly sexy best friend.

In school Lexi was off-limits for Marco. After all, she was his buddy’s girl. But she’s still as smart and as gorgeous—and apparently as immune to his charms—as she used to be. Yet the simple fake romance they agree upon to dodge Lexi’s grandmother’s matchmaking plans soon turns deliciously complicated.

And the sultry summer might bring together all the right ingredients for Marco to win the only woman he’s ever wanted.

Series: St. Helena Vineyard series, #2
Age: 18 years and up
Review: 3.5 butterflies
So we have Lexi, a divorcée to Marco’s best friend, Jeffrey. She plays it safe and never listens to her wants and needs, rather she focuses on others. This was proved time and time again when she would go on blind dates set up by her grandmother, even though she doesn’t want to.

And then we have Marco, a DeLuca and the “screw-up” of the family. I really, really liked Marco here. He was always trying to get Lexi to listen to her instincts and not to others, and unleash her wild side.

The first half of the book I didn’t like so much. It was very annoying seeing Lexi constantly be pushed over by her grandmother and everyone else, never doing what she wanted to do. And Abigail—Marco’s sister—was still annoying. When she found out that her best friend Lexi and her brother were dating, she flew off the handle. That part’s understandable, I mean it’s her best friend and her brother. But what really pissed me off was that, like the rest of the DeLuca family, she didn’t think of Marco in the best light and said things about him that just made me want to throw something at her.

In fact, the whole DeLuca family didn’t think much of Marco. They didn’t think he would be good at his job and were constantly doubting his abilities. I just wanted to hit all of them upside the head.

But once Lexi let go a little bit and they started to hang out more and more, it got better. Much better. I loved how Lexi and Marco’s relationship was so perfect and that they fit together so well. The happy moments between them were heart-melt worthy.

The conflicts that poor Lexi had to go through—including the no-good, cheating ex of hers—made me feel like the poor woman deserved a medal. And the way Marco made up for his mistakes and put Lexi first, that made me melt.

I loved the sweet ending that these two got and I’m looking forward to the next book in the series.

A free copy was provided by the publisher via NetGalley in exchange for an honest review.

P.S. I wrote a review on the first book of the series over at Novel Reflections.