WARNING: This post and the links from it contain adult content. If you are under 18 years of age or if such content offends you, please EXIT now.

Welcome to the book tour for Keeper of the Dragon Sword!! This fantasy romance book was published April 1st, 2013.


Keeper of the Dragon Sword by Linzé Brandon 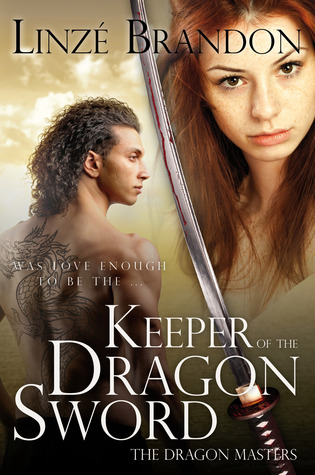 It was definitely not her week. Her uncle had been murdered, her life had been threatened, an old school friend had re-appeared, she had two body guards and a new home. Elizabeth L'Emery was not having a good time as the new owner and chief executive of the largest fabric manufacturer on Xa'an.

Randall Storm had missed his best friend from school, but he had so many secrets that staying away from her had seemed to be the only solution to keep her safe from the uncontrollable lust for blood of his dragon half. But when he was assigned to her protection detail, he didn’t want to be anywhere else.

As they search for ways to control his magic that didn't enslave him - and didn't kill her - more threats came to try and pull them apart. When the opportunity arises to put a weapon of incredible power into her hands, Elizabeth has to decide if the violence of the blood ritual would be worth the sacrifice of becoming the Keeper of the Dragon Sword.

We start with Randall, coming to tell Elizabeth that her mate (that’s what they call ‘husband’ or ‘wife’) is a murderer and that he killed both her father and her uncle. Poor Elizabeth is shocked—but not only because of her mate, but also because Randall is her old friend from school.

Randall has secrets, and big ones. He’s pained and has to exert control over himself at all times—lest he harm someone. And the only person who can help him is Elizabeth.

This story has so many twists and turns that I did not see them coming. I felt like this story had quite a few mini stories within it, because they would pass obstacles and yet new ones would arise. Looking back at everything I read, it seems like they were different times and different people.

During the beginning I was really confused. I felt like there was an overload of characters that I didn’t know and I couldn’t keep track of them all. I felt like this could be the second of a series, and then after finishing the book I realized that it is the first, but a companion to another series, which made more sense. After a while, I was able to keep track of everyone, so that wasn’t a problem.

There is different terminology used in this book, since we are on Xa’an, a planet with two suns and different ways of speaking. Instead of saying months, they say moons. Instead of calling it a wedding, they call it a joining. Husbands/wives are mates, years are sun rotations. It took me a while to get used to this way of speaking, but once I got the hang of it, it was much better.

The story is really complex. Along with being immersed in a completely different world with a different culture and a way of speaking, there are many different plotlines and challenges that both main characters have to face and overcome. Some things I felt were resolved really easily—after days and weeks of finding the solution, all of a sudden, there it is! So easy! But that didn’t take away from my enjoyment of the book, since there was another obstacle they had to face within the next few pages.

I really liked the deep love that they had and how they had to work for their happily ever after.

Sometimes I felt like the story was dragged on a bit and was waiting for something exciting to happen—but I didn’t have to wait for long. There was action all throughout these pages, and though sometimes it was confusing to keep track of what was happening, it was a thrill to read.

There were minor grammatical mistakes and a bit of overuse of commas, but they didn’t distract me much from my reading and were easy to ignore.

This book was really fun to read—though sometimes very emotional—and I definitely recommend it to people who love fantasy, romance, action, characters who overcome their demons, and happy endings :)

A free copy of this book was provided by the author in exchange for an honest review.

Linzé Brandon is the pen name of a South African engineer and project manager who taught herself to read before she went to school. She started writing in a time period of her life when she was self-employed as an export consultant, and had much better time management skills. Focusing on writing what she loves to read, fantasy and paranormal romance, she does dabble in SF, erotica and erotic romance when writing short stories. It is her dream to write novels full time, but until then she divides her time between work, writing, marketing her books, cross-stitch, archery and painting mixed media abstracts.

This book tour was organized by CBL Book Tours. The giveaway is sponsored and administered by the author.