Review on Eyes of Ember

Eyes of Ember by Rebecca Ethington 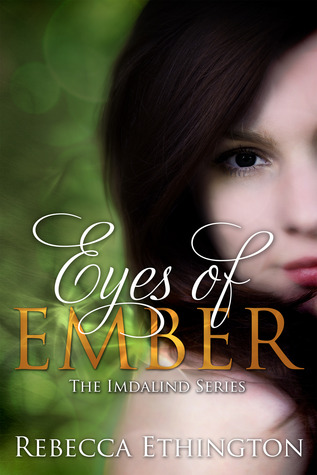 Joclyn is in hiding, hunted by the man she still desperately loves. Ryland is gone, his mind erased, no memory of Joclyn remains. But, Joclyn’s heart desperately begs her to hold out hope. While, in reality the black eyed monster that possesses him, attempts to kill her over and over.

If it wasn’t for Ilyan, Joclyn would be dead by now.

Ilyan. The man who once stalked her, is now Joclyn’s protector, the only thing she has left. He protects Joclyn from the men who seek to end her life, and while she is haunted by dreams where Ryland begs her to break the bond between them.

Ilyan is there. Always there.

Ilyan trains and prepares her, teaching her everything she needs to know in the hope that one day she can avenge Ryland, if not protect herself from him.

And then there is her father.

The man who has never been there, is suddenly responsible for everything. And who he is has made Joclyn into something she never wanted to be.

While this review does not contain any spoilers for Eyes of Ember, it does contain a few spoilers for Kiss of Fire, the first book in the series.

Remember pretty much everything I said about Ryland in my review of the first book? Yeah, scratch that. All of it. Okay, not all of it, but the part about being Joclyn’s true love. Yeah, that part.

That’s the only teaser you’re gonna get about this book, the rest will be my reactions. (Note: It is so freaking hard to write this review without spoilers, but I did it! However, if you’ve read this book and want to read my spoilers, go to my review on Goodreads.)

Okay. This book pretty much flipped around all of my pre-conceived notions of what was going to happen. No, not “flipped,” more like completely trashed them and then sent them hurtling at a wall and watched them crash into a million pieces. Seriously. I could not have expected what happened. Every time I thought I knew what was going to happen, the book threw me a curveball. It was like, “Surprise! Thought you knew what was gonna happen, now, didn’t you? WELL BOLLOCKS ON THAT.”

Like the previous book, the first part of this book was filled to the brim of brims with secrets. Secrets here, secrets there, oh look there’s another secret. Of course, they couldn’t be revealed until it “was time,” and Joclyn was “ready.” In other words, to make us be on the edge of our seats chewing our nails off with complete and total stress about what the heck they were keeping from Joclyn.

But, unlike the previous book, the action/suspense/frantic flipping of the pages didn’t start when the secrets were revealed. Noooo, it started way before that. Though there were secrets, there were also sweet moments, scary moments, terrifying moments, happy moments, Joclyn-kicks-ass moments, and Joclyn-is-being-stubborn moments. Joclyn did annoy me very few times, mostly when I felt she was just wallowing too much in her pool of pity and not focusing on what was truly important (like the SECRETS). But after said secrets were revealed, she gained focus somewhat. And then she was trapped. I won’t elaborate, but I did not see that coming. No way, no how. I’m awed at the author for having that happen and I cannot wait to see how Joclyn will get over what happened.

Ilyan. Oh, Ilyan. This sweet, handsome, amazing man is so patient and kind with Joclyn, and when SECRETS are revealed, it only makes me admire him more. (And also hurt for him. A lot.) Most times I felt like he doesn’t act like the king he is, more like just a man striving to protect a person he cares about. But I fell in love with him. He is kind, powerful, caring, sweet, patient, and so, so selfless. So selfless.

And then there’s Ryland. The Ryland we saw in the first book? Gone. Ryland made me hurt for other reasons. He tried so hard to fight it but life sucks and the author wants to torture us so that didn’t happen.

I really liked Dramin, by the way. I felt a sort-of grandfather vibe from him, though that’s not what he was. He was a great mentor and very wise—and I really enjoyed reading the scenes with him and Joclyn.

And then there’s Ovailia. I had the feeling she would be important from the first book, but I never imagined it would be in the way that it did. Once again, the author surprises me with her freaking fantastic (and frustrating) plot twists.

Oh, and the parallel between the first sentence and the last sentence in the book? BRILLIANT.

The plot, the magic, the bad-assery, the sweetness, EVERYTHING. I am quickly buying the next book in this series because I need to know what happens. I cannot wait for the plot twists that there are sure to be, though hopefully Joclyn will get to show more of her bad-assery. And then they all live happily ever after? (I doubt it, there’s another book after that!)

I recommend this book for everything I mentioned above, but mostly love. Though there’s heartbreak, there’s also love, and that’s the purest thing there is, isn’t it? (And action. There’s a lot of action.)

Stay tuned — tomorrow I will post my review on the next book, Scorched Treachery.