Welcome to the blog tour for Curve, a New Adult Contemporary Romance with British sensibilities! This book was published October 25th, 2013. 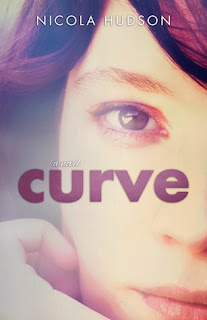 Cass is seventeen and never been kissed, let alone touched. On one humiliating night, that changes when two boys become interested in her. Flynn is the older brother of her best friend, yet Cass has never considered him as anything other than that. Rob is the school sports star and becomes obsessed with Cass when he loses a bet because of her.

As the relationship between Cass and Flynn develops, Rob's interest becomes increasingly malevolent. One terrible night changes Cass's life and threatens to destroy her relationship with Flynn, as well as her future.

I hadn’t sat in the front seat of Flynn’s car before as Neve and I usually took the back seat when he drove us. I was ridiculously conscious of how close we were. I inhaled the scent of his aftershave and noticed the tendons running down to his fingers when he changed gear. I told myself to focus on the view out of the windscreen, but couldn’t stop myself noticing other details for the first time. The way his watch peeped out from under the cuff of the hoodie he threw on as we left the house. The under-his-breath singing along with the radio. God, I’m obsessed.

“Yeah. Umm, Flynn…I wanted to say thank you for what you did at the party. I was too pissed off at the time to be grateful.” I continued to stare at his hand on the gear stick whilst trying to articulate what I wanted to say. “I know that all of this would have been worse if you hadn’t got involved and I probably wouldn’t even be able to leave my house if Rob had, umm, achieved his goal, and it’s not like it was Neve it was happening to and you needed to stop it-”

“No problem, Cass.” I took a breath, aware that I had been nervously rambling before his interruption. “And, anyway, I enjoyed it. Here you go, milady.” I opened the car door and thanked him before getting out. He gave the horn a quick beep as he pulled away from the kerb. He enjoyed it?

Shouting a quick hello to Mum and Sylvie, I ran upstairs to change. I shut my bedroom door and took a clean pair of jeans and top out of my wardrobe. As I removed the previous day’s clothes, I paused and looked at myself in the mirror.

My shoulder-length, dark brown hair, like everything else about me, was neither one thing nor another. Not straight, not curly. A bit annoying, really. You know, the sort of hair that never does what you want it to. I was grateful to have fairly decent skin, with only the occasional spot, so I suppose that made up for my paleness. But it wasn’t the hair or face that others commented on.

My shape would probably be politely described as hourglass in magazines but, in reality, it means that I have boobs, a noticeable tummy and a round bum. The boobs are OK, the rest less so. I admit to being a bit self-conscious about my size but I didn’t hate myself for being me. And of course I wanted the long legs and thin body of most girls my age. But who doesn’t look in the mirror and wish they looked like Taylor Swift or Kristen Stewart?

Rob’s flirting at the party took me by surprise because a boy had never paid attention to me in that way before. My heart sank a little as I remembered that Rob hadn’t either.

I quickly changed my underwear, put on my clothes and headed out of the door, avoiding looking into the mirror again.

I’ve always been an avid reader and occasional writer, but only ever for my own eyes! Then, last year, I read my first New Adult novel - and I was hooked. After consuming a vast e-pile of NA, the burning need to write my own was overwhelming. And so I started…

Fitting in writing around a demanding job and a wonderfully supportive husband has been, umm, interesting at times but the whole process has been a fantastic experience. I have been blown away by the friendliness and support shown by the readers, writers and bloggers who make up the NA and Indie communities; online with them is one of my favourite places to hang out!

I have already started the follow-up novel to Curve, Heart, which follows Neve as she starts at university.
Goodreads * Facebook * Twitter

This blog tour was organized by CBL Book Tours. The giveaway is sponsored and administered by the author.