Welcome to the Pentimento book blitz! This book is a Paranormal Post-Apocalyptic Young Adult and was published December 20th, 2013. 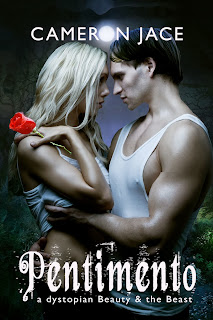 The day Iris Beaumont turns seventeen, she is threatened to be taken by the Beasts, the rulers of the new America. After the destruction of the world, the Beasts provide citizens with whatever they need in exchange for the one teenage girl they enslave every week. They call them the Brides, and they never comes back. Iris isn’t the worrying type though; she’s been defying the system since she was ten and never cared for the Beast’s rules.

Then she meets Colton Ray, who is not like any other boy she’s ever seen. His confidence and dominance are otherworldly she can’t rationalize the attraction she feels for him. Colton had one slight problem though. It’s rumored he is one of the Beast, and Iris could be the next on the Beast’s list.

Q: What inspired you to write another Beauty and the Beast retelling when there are a Beauty and a Beast in your Grimm Diaries series?
A: Well, first of all, it’s a totally different Beauty and the Beast. It’s a dystopian story that came to me after learning what about the art of Pentimento.

Q: So what is a Pentimento?
A: Pentimento is a painter’s term. It’s when you discover that an older painting had been originally drawn underneath the one you see right now. It’s a very interesting concept, and it’s true. The painter decides to change his painting midways, and then paints the new one above it. It happened a lot with great artists like Picasso and others in the past, mainly because they didn’t have enough money to buy a new canvas. Interesting enough, usually the new painting peel off and thins with age, and older one surfaces back. It has a great significance in the book.

Q: Does that mean it’s a complicated book?
A: Not at all. It’s a simple story about a girl named Iris Beaumont falling in love with a very interesting boy at seventeen. They live in a dystopian society ruled by an alien nation that demands a ‘bride’ each week in exchange for the services they provide for humans. It’s an easy read, a romance, only with Beauty and the Beast layers underneath.

Q: Can you give us an example of a real Pentimento Case in life?
A: Of course. Fragonard’s painting The Fountain of Love. Which is featured in the story. Here is a Youtube link to a video that explains the whole concept. http://www.youtube.com/watch?v=8r4NXfZs5qA

Q: The cover for Pentimento looks sexy. What do you rate the book?
A: Fairly PG. It’s a family friendly and it’s geared toward young adults, although many non-young-adults beta read it and loved it.

Q: Who are the Beasts in the book, really? And why do they take the girls?
A: Can’t say. Lol. You have to read it. And don’t forget to tell me what you thought of it. I am always open to suggestions and feedback.

Q: Anything you want to add?
A: I wish everyone and awesome Christmas and a Fantabulous new year :)
~~~ 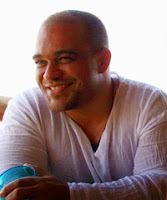 Wonderlander, Neverlander, Unicorn-chaser, enchanter, musician, survived a coma, & totally awesome. Sometimes I tell stories. Always luv the little monsters. I write young adult paranormal romance, urban fantasy, and science fiction mostly. The Grimm Diaries series is a seven book saga that deals with retellings of fairy tales from a young adult POV - it connects most of the fairy tales together and claims to be the truth about fairy tales. I live in San Fransisco and seriously think circles are way cooler than triangles.

This book blitz was organized by Xpresso Book Tours. The giveaways are sponsored and administered by the author.