Welcome to the Tempting Death book blitz! This book is a Young Adult Paranormal Romance and was published May 30, 2016! 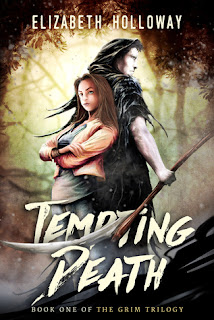 The truck should have turned Libbi Piper into a Libbi pancake, but a mysterious boy named Aaron saved her life. The problem? Aaron’s the local Grim Reaper. The bigger problem? He saved Libbi’s life so she can take over his job.

Libbi has just days to choose between dying like she was supposed to or living a lonely life as Death Incarnate. The choice only gets harder when she learns Aaron’s reasons for wanting out of the whole morbid business. Basically, his job sucks.

As soon as I see her I know the old woman on the bed is the Rosie I heard in my head. She’s on her back with the blanket bunched at her feet, as if she was thrashing to wake herself from a nightmare. Her short white curls fan the pillow around her head like a halo, but the light I’ve seen on every other person since I met Aaron this afternoon is missing from her. It’s as if someone came along and flipped her light switch off. Her wide blue eyes are fixed on the young man standing beside her, holding her hand.

Aaron Shepherd’s skin is on fire, easily three times more brilliant than Max or anyone I’ve seen today. I can hardly look at him. His head snaps up at the squeak of the door, and his eyes find me.

He drops Rosie’s hand. It flops to her chest and slowly slides across her body to dangle off the edge of the bed.

I want to save your life. Aaron’s words to me this afternoon replay in my memory. And believe me, Libbi, saving lives is not something I do often.

I stumble back, and my butt pushes the door behind me closed. Now I know why Aaron said he doesn’t often save lives. He’s the opposite of a lifesaver. He’s a murderer.

“Oh,” is all I can say as my hand scrambles for the doorknob. A scream builds in my throat.

“No, Libbi! Don’t leave, and don’t scream. I know this looks bad, but it isn’t what you think it is.” Other than the bruise from the punch I gave him earlier, Aaron’s face is pale. I suddenly wish I’d punched him harder. Added a little more color to those white cheeks of his.

My stupid fingers scramble over the door behind me, but I can’t find the doorknob. Aaron takes a step toward me with one hand raised. I yelp and leap away from him and the door—my only means of escape—like an idiot.

Aaron takes the opportunity my stupidity creates and blocks my exit. He raises both hands to the level of his chest, palms out, like my father used to do when he tried to calm Mom during a balls-out fight.

“Look,” Aaron says, his eyes earnest. “There’s no need to be scared. I’m just doing my job. If you had been here on time, you’d know that.”

“Killing old people is your job?” I say. “What are you? Some freaky, psychic hit man to the elderly or something?” I scoot deeper into the room, moving closer to Rosie’s dead body, but farther away from her killer. My fingers close around a glass of water on Rosie’s table. He may be able to predict my death and psychically lead me around town with a headache, but I know I can hurt him if he’s surprised. The greenish-purple mark on his chin is proof. Maybe Aaron will stumble away from the door if I throw the glass at him. Then I can rush out and sprint down the hallway, yelling for help the whole way.

“What? No! I didn’t kill her,” Aaron says. “She was dying. It was her time. Didn’t you feel it? The headache? The pulling in your head?”

“Yeah, I know about the headache.” I lift the glass off the table behind me and prepare to lob it at his head. “I’m not sure how you did it, but I felt it.”

“I didn’t do it, Libbi, but I’m the reason you had it.” Aaron says this like the pounding explosion between my ears is some precious gift. “I can prove it.”

“Rosie told me she was ready to go. She called me Bruce. You heard that inside your head, right? How would I know that?”

I don’t know how he knows that, and I don’t care. The guy can do a lot of freaky things; he can probably read minds too.

“Now, I won’t keep you from leaving, if you want, but please don’t interrupt me anymore. It’s getting late and I need to finish this. Let me finish my job. Rosie has somewhere important to be, very soon.”

I glance over at the still form on the bed. Rosie isn’t going anywhere very soon, unless the morgue counts.

Aaron keeps his hands up in front of him as he steps away from the door, true to his word. The sleeve of his shirt brushes my arm as he returns to his place next to the bed, and chills roll over my body. It’s as if the guy has an eerie force field surrounding him.

My fingers release the rim of the glass. I don’t trust him—he totally creeps me out—but I no longer need to throw the glass at him. My escape route is clear.

And my curiosity is up to full throttle.

“Well, that’s a little advanced for you.” He scowls down at Rosie. “I’ll show you that later. But you should really watch this part closely.” His frown drifts back up to me. “I really wish you’d been here earlier. This would make more sense. But there’s no time to explain now, so let’s call this ‘Lesson One.’”
~~~

Elizabeth Holloway is a writer of young adult fiction living in Southern Pennsylvania with her two teen children and their growing number of pets.

In addition to writing, she is a registered nurse, an avid reader, an out-of-practice artist, a karaoke singer, and a music lover. She is still trying to decide what she wants to be when she grows up.

By entering the giveaway, you are accepting my giveaway policy.
Blitz-wide giveaway (INTL)
$50 Amazon Gift Card
Signed Copy of Tempting Death: Book One of the Grim Series
a Rafflecopter giveaway
Yours,